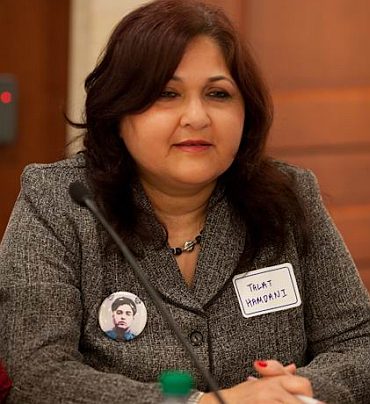 Talat G. Hamdani is the mother of Mohammad Salman Hamdani, a 23-year-old New York Police Department cadet and EMT who sacrificed his life trying to save others on 9/11.

Mrs. Hamdani is an advocate for civil liberties and an activist for human rights and interfaith understanding. She speaks in a variety of public forums about the need for Americans of all faiths to reject Islamophobia. Like other Muslim Americans, Mrs. Hamdani fearlessly criticized the fundamental unfairness of hearings by Rep. Peter King of New York, chairman of the House Committee on Homeland Security, which targeted adherents of only one faith tradition: Islam. She sat in the front row throughout the one-day hearing. Its emotional high point was the testimony of Rep. Keith Ellison of Minnesota, the first Muslim elected to the House of Representatives. He wept openly as he told the story of the suspicion and innuendo that the media published, hinting that Salman was somehow involved in the attacks, even as his family endured the unspeakable pain of a fruitless search for him. His remains were found in the rubble of the World Trade Center, and his heroism was also recognized officially in the USA Patriot Act.

Talat, an educator, talks about her son wherever she speaks in public, as a difficult but essential lesson about valor, sacrifice, fear and intolerance and bigotry.

Talat completed the Fellowship of National Security & Human Rights Leaders at The Rockwood Leadership Institute in 2011. In September 2012, Talat was given The Patriot Award by the Bill of Rights Defense Committee.