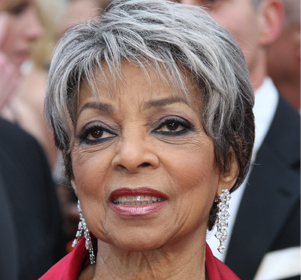 Born in 1924, Ruby Dee has been an actress for over 50 years, and she has also been a long-time civil rights activist and writer.

She is a recipient of several awards, including the Emmy, and the Screen Actors Guild’s Life Achievement Award, which she received with her husband, Ossie Davis. She has appeared in films such as A Raisin in the Sun, Roots: The Next Generation and Spike Lee’s Do The Right Thing and Malcolm X. She has also appeared in television series, movies, musicals, and performed in plays such as Athol Fugard’s Boesman and Lena. She was the first African American woman to play lead roles at the American Shakespeare Festival and she turned her own stories, folktales and poetry into the 1998 one-woman show, One Good Nerve.

Ruby Dee has worked with dedication and passion in support of equal rights for all, and played a leading role in challenging McCarthyism. She and her husband were close friends of Rev. Martin Luther King, Jr., and they served as masters of ceremonies for the 1963 March on Washington. They were also friends and supporters of Malcolm X and the Shabbazz family.

Ruby Dee represents a model for us in how she has lived her family life: she and her husband have collaborated closely in all their work. They have raised three children together and they are authors of the book, With Ossie and Ruby: In This Life Together. A collection of Ruby Dee’s and Ossie Davis’s papers is housed at the Schomburg Center for Research in Black Culture.