Recipient of the 2012 Compass Award 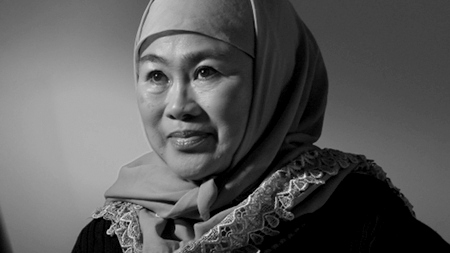 Potri Ranka Manis Queano Nur is the Founder/Artistic Director and Tradition-Bearer of Kinding Sindaw, and a Storyteller). In July 23,2005 Potri was enthroned as Bai a Labi a Gaus sa Borocot by the representatives from the 17 Pagawidan a Ranao in Marawi City, Lanao del Sur.

Born and raised in the Southern Philippines, she is a daughter of the late Sultan a Gaus of the Royale House of Borocot the 15th Pagawidan of the Pat Pengempong a Ranao. She also learned the traditions of the neighboring indigenous communities She was commissioned by PETA (Philippine Educational Theatrical Association) to write Lemlunay originally as a play. in 1983. An award-winning poet-playwright, she has published Sandstorm in Jeddah , a collection of poetry of her experiences in Jeddah, Kingdom of Saudi Arabia. Recent works include: Conceived, Directed and choreographed: Bembaran with Perang sa Bayang Intertwined© (2007/LaMaMa), Sultan Kudarat© (2005/LaMaMa), Parang Sabil©(2004/LaMaMa), Lemlunay© (2003/LaMaMa), Rajah Mangandiri© (2000/LaMaMa), Irimun O Banag©, Pandibulan (2010/LaMaMa) and Disappeared. She founded Panata and co-authored and performed the Oratoyo-Bells of Balanggiga and acted a lead role in Dis-oriented, a feature film of Francisco Aliwalas. She was in Draupadi directed by Ellen Stewart, La Mama Great Jones Repertoire. She is a artist-teacher faculty of Lotus Fine Arts. She a practioner of Theater of the Oppressed and a producer and actor in Newyorkustan directed by Steven de Castro. Potri is an artist-activist who campaigns for self-determination of the Moro and indigenous people. She is a resident Artist of LaMaMa, Experimental Theater Club.

Potri is also a Board Certified Medical- Surgical Registered Nurse. As a Nurse –Educator, Critical Care , Holistic Nurse, she created the healing modality called Resilient Ancestral Nurturing Knowledge and Arts (R.A.N.K.A.®). She is a member of the Philippines Nurses Association of New York, Founding Board of Director of Kalusugan Coalition, Board of Director of New York City Community Health Network.