Recipient of the 2015 Compass Award 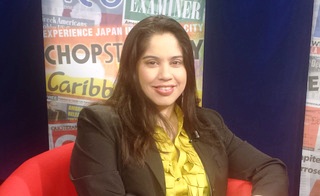 Lucia Gómez is the Executive Director of La Fuente, a Tri-State Worker and Community Fund that empowers immigrants and their communities to take action through grassroots organizing, leadership development and civic engagement.

In this capacity she oversees organizing and coalition operations throughout New York, New Jersey and on Long Island. Since taking on this role at La Fuente, Lucia has overseen the enhancement of the membership program as well as the Leadership Development Institute. Additionally, La Fuente has become a vanguard actor in coordinating actions around economic justice, educational justice, access to services, immigration reform and civic engagement under her direction. La Fuente has been a dedicated participant in the Coalition for Eid Holidays.

Ms. Gómez has a history of thorough and impassioned involvement in community issues. Prior to heading La Fuente, Lucia held high responsibility government and non-government positions. She served on the transition team and, later, as Community Affairs advisor for New York State Senator Gustavo Rivera. Her time as the Assistant for Community Affairs to Governor David A. Paterson saw her spearhead Latino and Immigrant relations for the administration. In this role, she also coordinated the Executive Chamber’s efforts to promote New Yorkers’ full participation in the 2010 Census.

Lucia possesses a high degree of skill in election administration, geographic information systems and community organizing, and advanced knowledge of voting laws. In 2011, she was an Advisor to the members of the New Jersey Legislative Reapportionment Commission. Lucia spent time as the Director of the New Jersey Regional Office of the Cuban American National Council (CNC). She served as the Administrator of Elections for the City of Providence, Rhode Island and worked as the Civic Participation Program Director for Latino Justice PRLDEF and the National Institute for Latino Policy, overseeing programs in eight states, Puerto Rico and the US Virgin Islands in political redistricting and mobilizing Latino communities for the 2000 Census.

Ms. Gómez has a BA from Rutgers University-New Brunswick, studied anthropology at the Universidad Autónoma de Yucatán, México, and has a Graduate Certificate as an Associate School Library Media Specialist. Lucia is a graduate of the 2011 class of the Coro Immigrant Civic Leadership Program and a Policy Fellow for the National Institute for Latino Policy (NILP). She currently resides in Union City, New Jersey where she works daily towards developing and modeling the values of community and a respect for diversity with her daughter, Victoria Jiménez-Gómez.