Recipient of the 2013 Compass Award 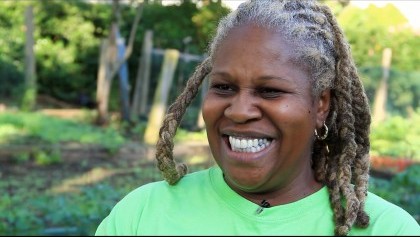 Karen Washington has lived in New York City all her life, and has been a resident of the Bronx for over 26 years. Since 1985 Karen has been a community activist, striving to make the New York City a better place to live. As a community gardener and board member of the New York Botanical Gardens, Karen has worked with Bronx neighborhoods to turn empty lots into community gardens. As an advocate, she has stood up and spoken out for garden protection and preservation. As a member of the La Familia Verde Garden Coalition, she helped launched a City Farms Market, bringing garden fresh vegetables to her neighbors.

Karen is a Just Food board member and Just Food Trainer, leading workshops on food growing and food justice to community gardeners all over the city. Karen is a board member and former president of the New York City Community Garden Coalition, a group that was founded to preserve community gardens. She also Co- Founded Black Urban Growers (BUGS) an organization of volunteers committed to building networks and community support for growers in both urban and rural settings.

In 2012 Ebony magazine voted her one of their 100 most influential African Americans in the country. Professionally Karen has been a Physical Therapist for over 30 years, and she continues to balance her professional life with community service. “To grow your own food gives you power and dignity. You know exactly what you’re eating because you grew it. It’s good, it’s nourishing and you did this for yourself, your family and your community.” Karen Washington