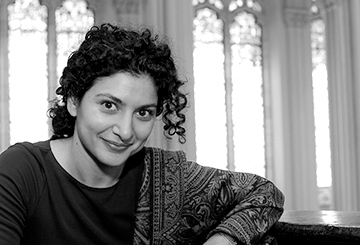 Kayhan Irani is an artivist and an Emmy award winning writer. She believes in the liberatory power of the arts to deepen people’s engagement with social issues and transform society. She is a writer, director, performer, and facilitator. As a performer and writer, Kayhan’s pieces magnify the relevant issues of the day. In 2010 she won a New York Emmy award for best writing for “We Are New York” a 9-episode braodcast TV drama and English language learning and civic engagement tool for immigrant New Yorkers.

Her acclaimed one-woman show, “We’ve Come Undone”, which tells the stories of immigrant women post 9/11, has toured nationally and internationally. In 2007 she was awarded a certificate of recognition by Mayor Michael Bloomberg for her arts work in immigrant communities.

She is an enthusiastic practitioner and trainer of the Theater of the Oppressed, a participatory form of theater for social change. She facilitates workshops for diverse organizations and institutions on a local, national, and international level – travelling as far as Kabul, Afghanistan (2010) and Baghdad, Iraq (2004) to use theater for change. She has lead theater programs for community groups, public schools, juvenile detention facilities, government agencies, and with the general public. She is also a keynote speaker.

As a published author, (Routledge, May 2008.) Kayhan has co-edited a volume of essays entitled, “Telling Stories to Change the World: Global Voices on the Power of Stories to Build Community and make Social Justice Claims”, about projects around the world that use storytelling as a way of creating social justice.

She is a member of the Dramatists’ Guild.