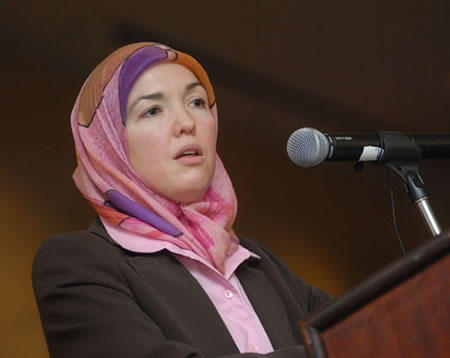 Dr. Ingrid Mattson is Professor of Islamic Studies and Director of Islamic Chaplaincy at the Macdonald Center for Islamic Studies and Christian-Muslim Relations at Hartford Seminary in Hartford, CT. In 2006 Dr Mattson was elected President of the Islamic Society of North America (ISNA); she previously served two terms as Vice-President. Dr. Mattson was born in Canada, where she studied Philosophy at the University of Waterloo, Ontario (B.A., ’87). From 1987-1988 she lived in Pakistan where she worked with Afghan refugee women; she continued to work with Afghan women’s groups after returning to the United States. Dr. Mattson earned her Ph.D. in Islamic Studies from the University of Chicago in 1999. She has written articles exploring the relationship between Islamic law and society, as well as gender and leadership issues in contemporary Muslim communities.

Her forthcoming book, The Story of the Qur’an: Its History and Place in Muslim Societies, is being published by Blackwell Press. Dr. Mattson is frequently consulted by media, government and civic organizations and has served as an expert witness.