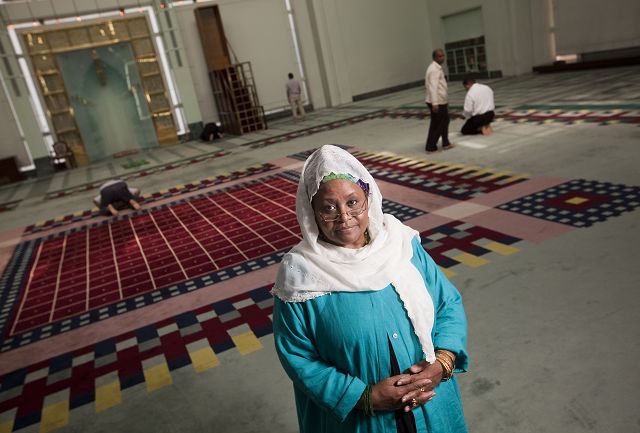 NEW YORK // Most days Aisha al Adawiya, 65, rushes from her full-time job at the Schomburg Center for Research in Black Culture in Manhattan to meetings for the advocacy group she helped found in 1992, Women In Islam. The focus for her current work is making mosques in New York City and the United States more female-friendly. “The issue of mosques not being welcoming to women has constantly been on my radar screen,” she said. “But it was only a few years ago that I decided it was time to turn this into a full-fledged campaign.”
Muslim women in the United States have long complained that they are treated as second-class citizens in mosques; forced to pray in dingy basements, or on balconies instead of in the main prayer hall. Other mosques ban women outright. Women also complain that female toilets and ablution spaces are often inadequate and poorly maintained compared to those for men. According to the Washington, DC-based Council on American-Islamic Relations, America’s largest Islamic civil liberties group, in nearly two-thirds of America’s 1,200 mosques, women pray behind partitions or in separate areas. The 2001 study also found that almost a quarter of mosques do not offer programmes for women, and a third do not allow women on governing boards.
For Ms al Adawiya, the inspiration to take up the cause came from an incident in the New York suburb of Brooklyn a few years ago when, during a break from a meeting with an elected official in the area, she and her colleagues stepped out to look for a mosque. “We were about to step through the door of a nearby mosque to offer our afternoon prayers when we were told there was no room there,” she said. “But I stood my ground and eventually a young man intervened and convinced the elder to let us pray.”
For this African-American woman who embraced Islam in the early 1970s and has remained passionate about the study of her adopted religion, it was the catalyst she needed. Since then, she has been working to change attitudes at mosques all over the country, printing pamphlets offering ideas on how mosques could become more female-friendly. Besides simply advocating for women to pray in the main prayer hall, Ms al Adawiya also emphasises the need to have better representation of women on the governing boards of mosques and permission for women to attend all community functions.
There have been some advances. In mid-June, Salmenna Sediqe was elected the first female leader of a mosque. “It’s a massive responsibility, honestly. I was praying and hoping to God that I will fulfil my position the right way,” she said, talking about her role at the Masjid Saad Foundation of Toledo, Ohio. Though her election is a welcome sign, activists are aware their job of making mosques more inclusive is far from over.
Daisy Khan, the executive director of the American Society for Muslim Advancement, said part of the problem was that mosques were structured as “men’s clubs”. “Mosques in America are mainly constructed around the Friday prayer, which men are expected to be particular about attending. Since Friday prayers are not mandatory for women, the men tend to protect their turf by trying to keep women out.”
Most scholars believe mainstream Islam allows women to share the prayer hall with men, as long as they pray behind the men. “In the seventh century, Muslim men and women would pray behind Prophet Mohammed,” said Mahmoud Ayoub, an Islamic scholar at Hartford Seminary. “Historical accounts reveal the Prophet repeatedly emphasised that while there was no compulsion on women to attend prayers in mosques, they should not be banned from doing so.” In Mecca today, both genders pray without segregation.
It took Asra Nomani, a writer and activist, three years of persistent lobbying before her mosque in Morgantown, West Virginia, opened up its prayer hall and the board to women. It was a small but important victory. “Before we began making our presence felt in the prayer hall, the imam would always begin his sermon simply by addressing the brothers. After he began seeing us in the hall, he changed his address to brothers and sisters,” she said.
With the recent economic downturn, some activist see a regression. Ms al Adawiya said at the mosque she regularly prays at on the Upper West Side in Manhattan, they have started asking women to pray in classrooms. “When I asked why, they said a doctor had objected and said he would not allow his wife to come if women prayed in the same room. I believe they were afraid of losing his support as a patron.”