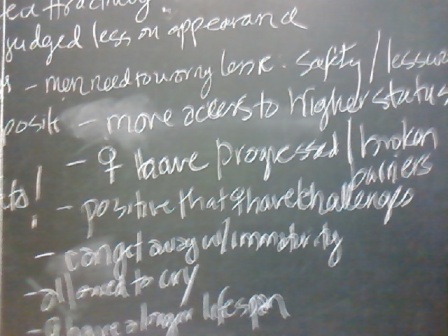 In late May, Women in Islam, Inc. collaborated with City Year to deliver a day-long workshop on Muslim women to a group of 20 City Year members.  City Year is a national non-profit that connects young people to year-long service opportunities; their motto is “give a year, change the world!”  City Year corps members who came to the workshop are serving as volunteers in New York City classrooms and  afterschool programs and range between the ages of 17 and 25. Some of them had encountered Muslim students in their work, while others knew about Islam and Muslims only through media images.

At the workshop, students discussed in depth their own experiences of gender, their perceptions of Islam and Muslim women, and heard from two panelists who shared their stories and their lived experiences as Muslim women in the United States.  City Year Corps members then took their learning to the streets and dialogued with people in and around the Columbia University campus about their perceptions of Islam and Muslim women. Zara Chaudary from City Year NY and Sarah Sayeed, President of Women In Islam, Inc. co-facilitated the workshop.